Similarities, Differences and Our EDC Preference 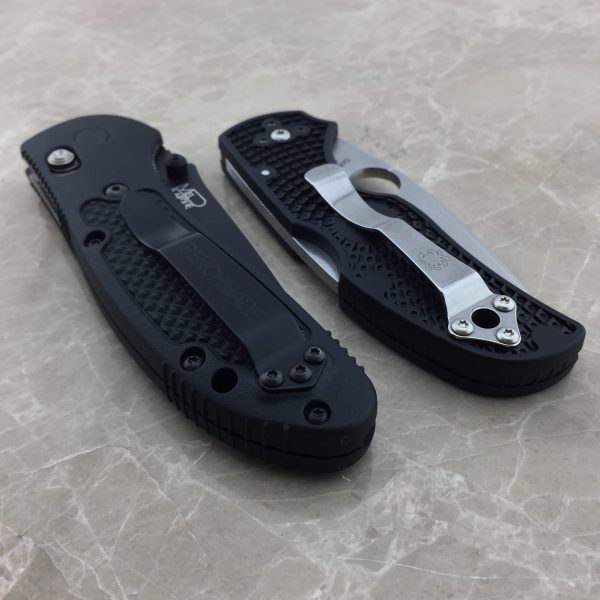 When looking for a good sized, lightweight, everyday carry knife at an affordable price, the Benchmade Griptilian and Spyderco Native 5 are great options. Both knives offer excellent features, from excellent brands and unlike most competitors, they are both made in the USA. In this blog, we will break down the differences between the Benchmade 551SBK Griptilian and Native 5 to better your understanding between the two. Both the Griptilian and Native 5 do come in different variants, but all models are similar. The lightweight ergonomic designs of both these knives make for a great addition to any EDC. 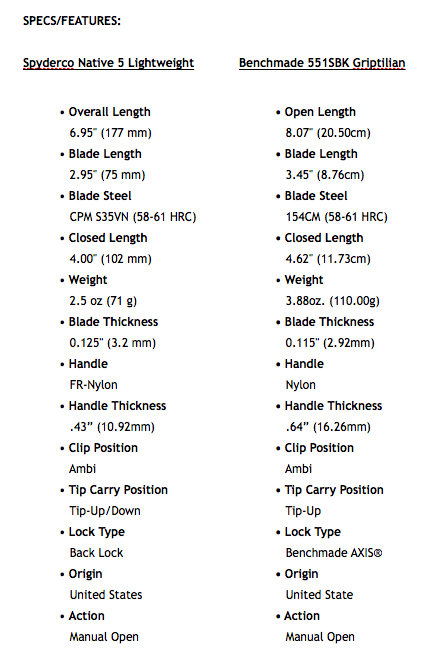 When closed, the textured handle on both knives catches my eye. Both the Griptilian and Native 5 feature a lightweight, textured nylon handle. Spyderco advertises the Native 5 as being fiberglass reinforce adding a slight advantage in the Native’s construction materials. With the added texture to both knives, your grip becomes more secure and less likely to fail when the knife is in use. The Griptilian has a diamond pattern texture that is simple and sleek, whereas the Native 5 has an intricate pattern of squares, raised on one edge, laid out in a circular pattern around the Spyderco emblem in the center of the handle. Both texture patterns are very good looking leaving me with no complaints. 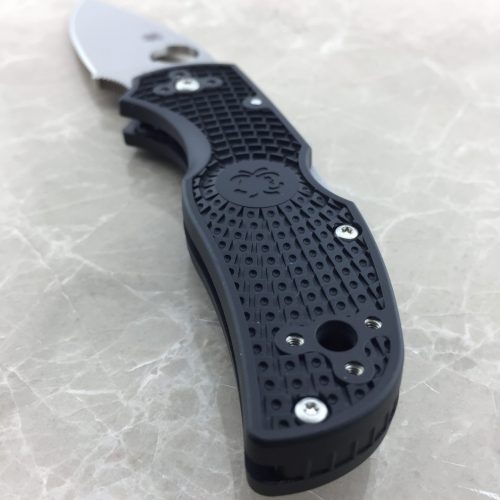 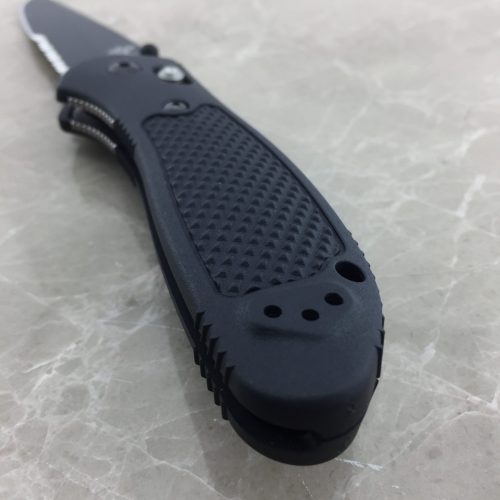 The handles also offer plenty of space to hold the knives with all four fingers wrapped around. With the added finger space located on the base of the blade, the Spyderco Native 5’s slightly shorter grip area becomes virtually the same as the Benchmade Griptilian’s when opened. One thing I do like about the Griptilian is the slightly rounded handle. In my opinion this offers a slightly better grip, although, it does add some size to the handle thickness. If you prefer to carry a slim knife, the flat handles of the Native 5 do make the knife slightly thinner, but of course I believe you sacrifice some grip and comfort. It’s just a matter of personal preference.

Both handles are fully ambidextrous and feature reversible pocket clips for the left handed or right handed user. The Native 5 goes a step further by offering slots to change the pocket clip to a blade tip down position when closed. These extra clip slots can be found on either side of the knife. In total the Benchmade has 2 pocket clip positions and the Spyderco has 4. Both knives also have a lanyard hole on the rear. The Native 5’s is slightly bigger, but both can fit 750lb paracord. The Griptilian is a tighter fit for the paracord, but should work.

If I had to give a slight edge to one handle I would pick the Native 5’s. It simply has more features. But the difference between the two handles isn’t enough for me to decide between the two knives. 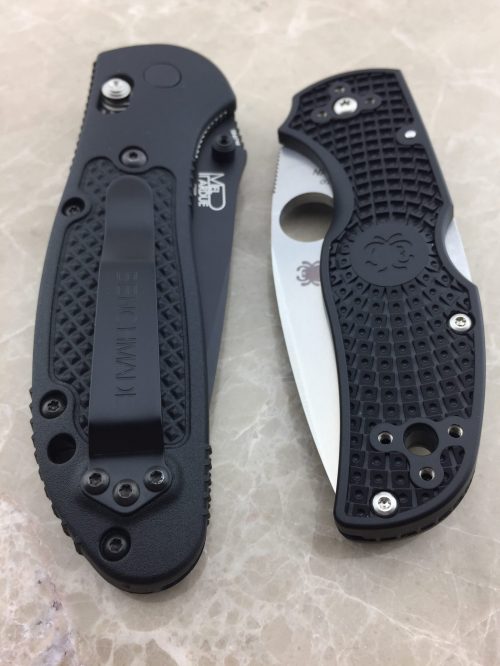 The locking mechanisms on these knives are worlds apart. The Benchmade Griptilian features Benchmade’s AXIS® Lock while the Spyderco Native 5 features a back-lock mechanism. One is not necessarily better than the other, just like most things it is ultimately personal preference. I personally prefer the AXIS as it is much smoother, ergonomic and can easy close the knife with one hand. The back-lock on the Native 5 is quite stiff, which feels very solid, but also feels like it needs to be broken in. With a little practice the back-lock can be closed one handed but a change in grip is required. 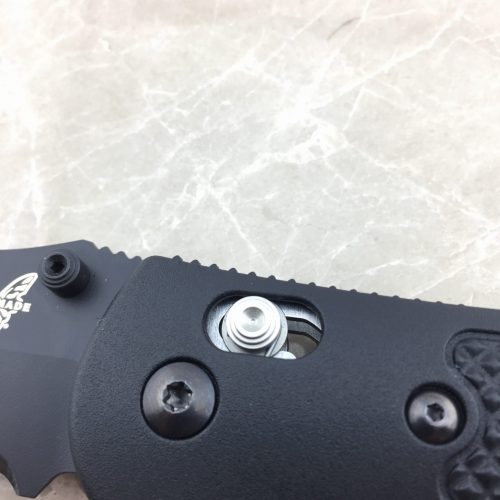 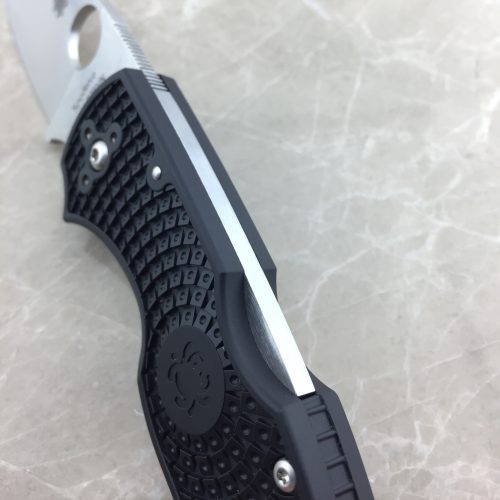 The opening of these knives both require a manual push or flick. The Benchmade 551SBK Griptilian has a thumb stud and spins easily on its rotation point, allowing the knife to be flicked open with the thumb stud or by holding down the AXIS® lock and flicking with your wrist. The Griptilian is very smooth and has a positive click when fully extended, as if to say, “I’m locked”. The Griptilian also has a thumb hole model avaliable.

The Spyderco Native 5 only comes with a thumb hole opener which is the classic Spyderco design. Thumb holes require a slightly different angle of pressure to open, but can be just as easy as a thumb stud. With the slightly shorter blade on the Native 5 it is a bit harder to open with a flick then the Griptilian. But with some breaking in I’m sure it could flick easily. Just like the Benchmade the Spyderco clicks when fully extended and locked. Both blades have no wobble or play when locked. 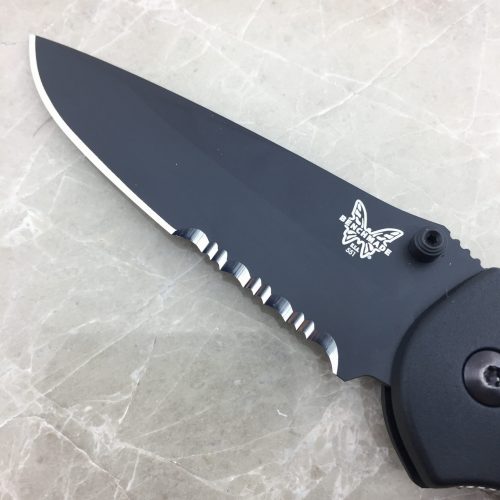 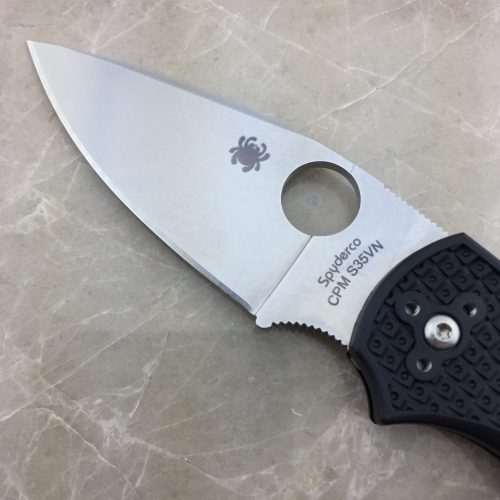 The blades of the knives are quite different. Both can come serrated, plain edged, finished, or satin. But the biggest difference between the two is length. The Benchmade Griptilian is a half an inch longer at 3.45” where the Spyderco Native 5 is 2.95”. Of course, the saying may go something like, “it doesn’t matter how big, it matters how you use it.” So, as all things, this is personal preference. The shorter blade on the Native 5 does make the blade lighter and easier to manipulate quickly, but it is much harder to flick open as the less weight and length gives it less leverage on its axis. 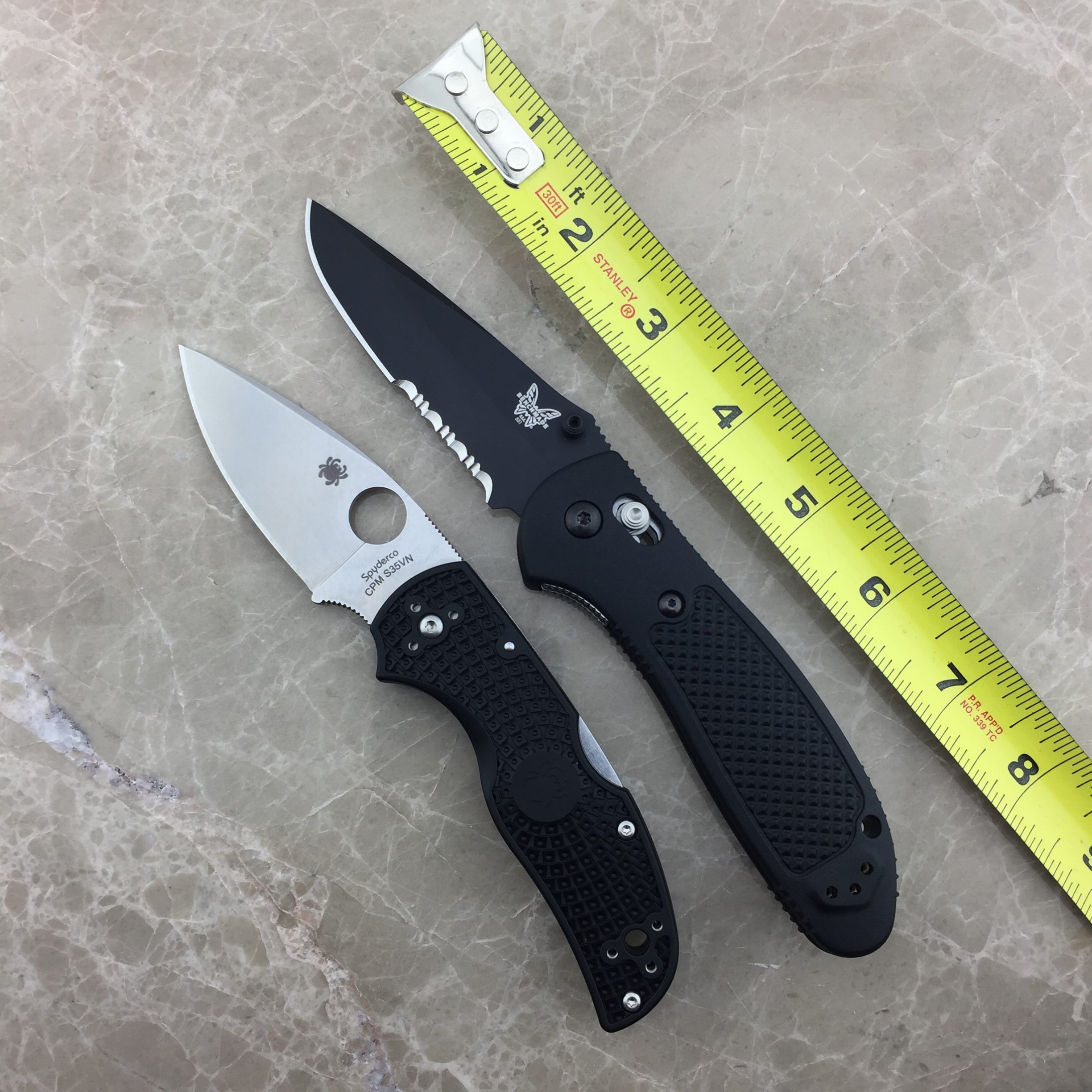 The steel used on both blades is fairly similar. The Spyderco Native 5 uses S35VN which is a newer steel type originating in 2009, according to Larry Connelley of knifeart.com. S35VN steels are made with the same carbon and chrome content as the older S30V, and from various tests both steels provide the same edge retention and corrosion resistance. S35VN is a Crucible Particle Metal making the steel homogenous. This high-end steel foundry process leads to remarkable stability, grindability, toughness and a cleaner finish than traditionally made steel. Particle metal steel manufacturing is only done by a handful of steel manufacturers around the world.

The Benchmade Griptilian steel is 154CM. This variant of 154CM is not a powdered steel, although there is a powdered version. 154CM is a good balance between all three attributes, being relatively hard, tough and corrosion resistant. Both the 154CM and S30VN have similar attributes and perform nearly the same. The S30VN is generally more expensive because of more involved manufacturing processes and probably more consistent due to it being powdered, but ultimately the steels have the same HRC and perform alike. 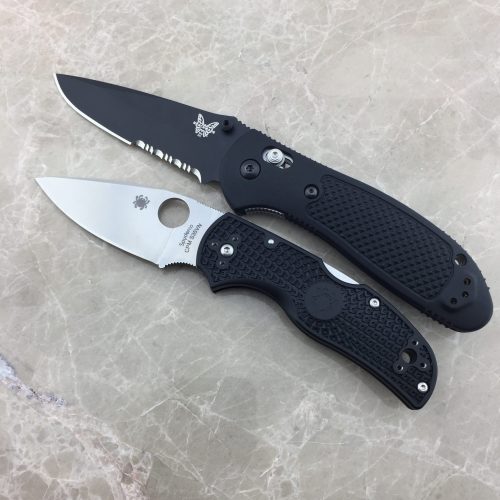 The Options for Both Knives

The Benchmade 531SBK Griptilian used for this review does have a drop-point serrated blade, but the Griptilian also comes in tanto or sheepsfoot shape. Compared to the Native 5 Lightweight which only comes in one blade shape called “Leaf-Shaped”. Although it only comes in one shape, the Native 5 does come with a fully serrated “SpyderEdge” blade, combination of serrated and plain blade, and fully plain blade styles.

Which One Will It Be?

Both the Benchmade Griptilian and Spyderco Native 5 Lightweight are excellent EDC knives. They are remarkably lightweight and manufactured by some of the best in the business. It is ultimately up to you when choosing a winner between the two. Both have different features to offer, but ultimately get the job done. Both manufactures offer great warranties and sharpening services that make the higher end manufactures completely worth it. With either of these knives you could be cutting something 30 years from now and say, “I think this knife could use a sharpening” and send it in to be restored to near new quality. There’s nothing like the ability to get an old knife refurbished for the cost of shipping. It’s just up to you which one it will be. 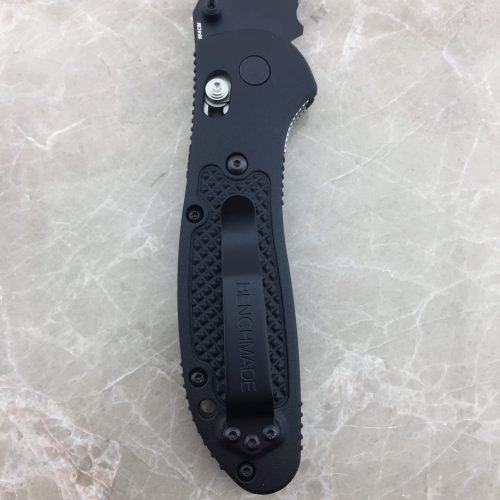 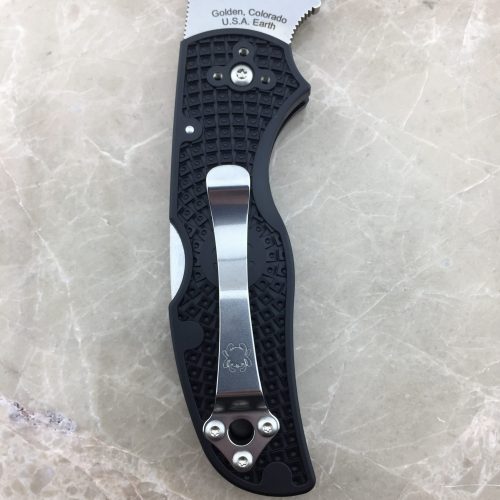