Perfect For an EDC 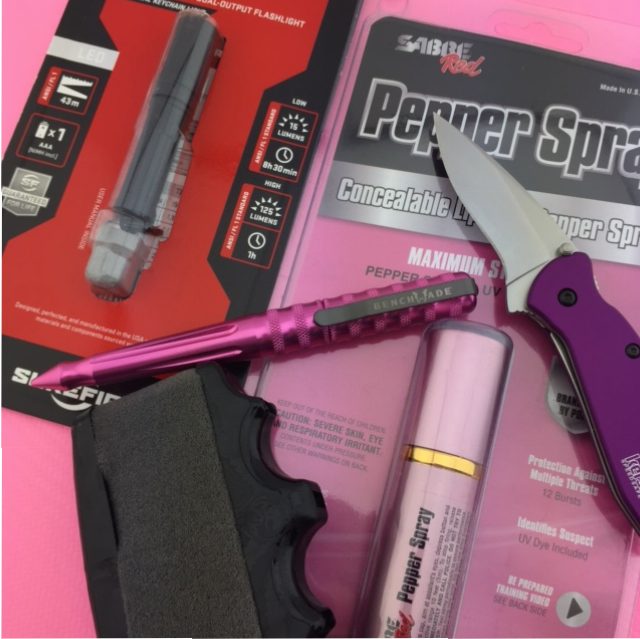 When it comes to being prepared, there are multiple tools available that are geared towards women. For those who do not wish to carry a firearm but still want protection, short ranged personal tools or less than lethal options would be the next step. There are many awesome tools ranging from pens, knives, to even freakin’ retractable claws! In this blog, we will break down various options available by their functions and uses. 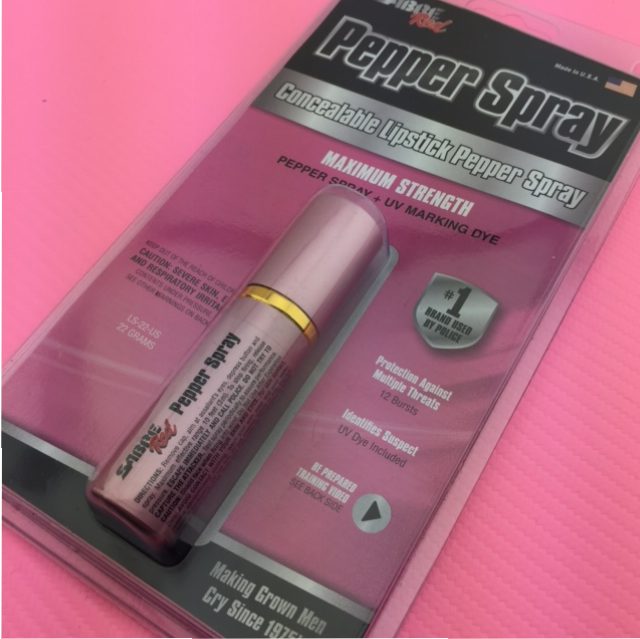 An extremely effective deterrent for would be assailants is pepper spray. Used by police and civilians, this material has been proven to be useful in repelling or subduing a threat. Sabre produces many different variations, but for this list we have chosen the Sabre Concealable Lipstick Pepper Spray.
This Pepper Spray comes in a container designed to look like lipstick, creating a perfect concealable disguise, hence the name. Within the device is 22 grams of pepper spray capable of repelling a maximum of 12 attackers at a range of 10 feet. If used accurately against an attacker, this spray would easily prevent the attacker from seeing clearly. With a range of 10 feet the device is available to use without getting within the reach of a possible attacker. The spray can also be used to simply keep someone away by just brandishing the piece of equipment. Here are the official symptoms of the attacker after they spray is deployed: 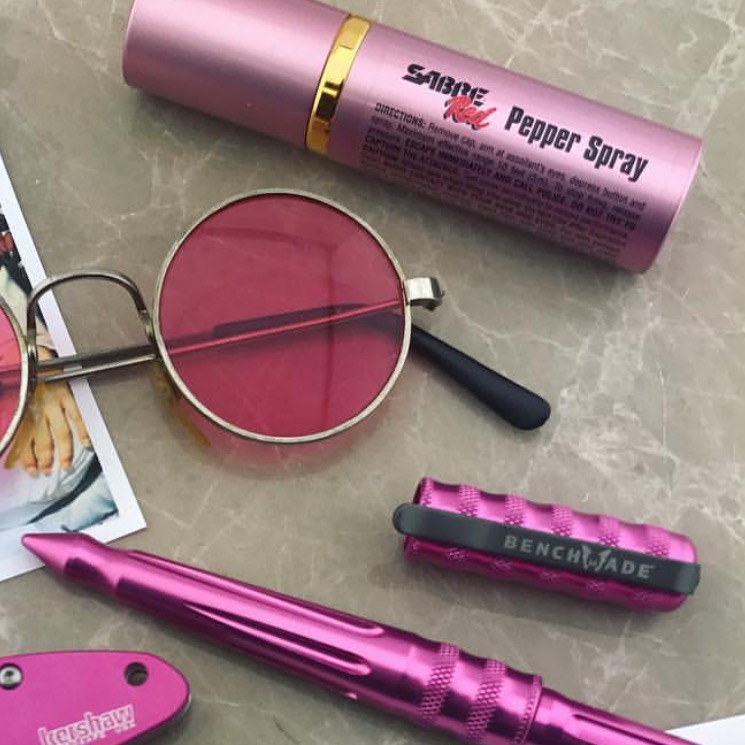 The active ingredient in this pepper spray is red pepper. Also, included in this particular spray is a UV marker. If you were to spray someone, they would be identifiable after washing the visible signs of pepper spray off. All a law enforcement officer would need is grab a UV light and your assailant will glow in the sprayed areas. Many videos exist online demonstrating the effects of a pepper spray device. For the money, they are a great and effective less than lethal tool that can simply deter someone by displaying the device. Most civilian models easily fit into a purse or pocket and some feature a key ring to add to a keychain. 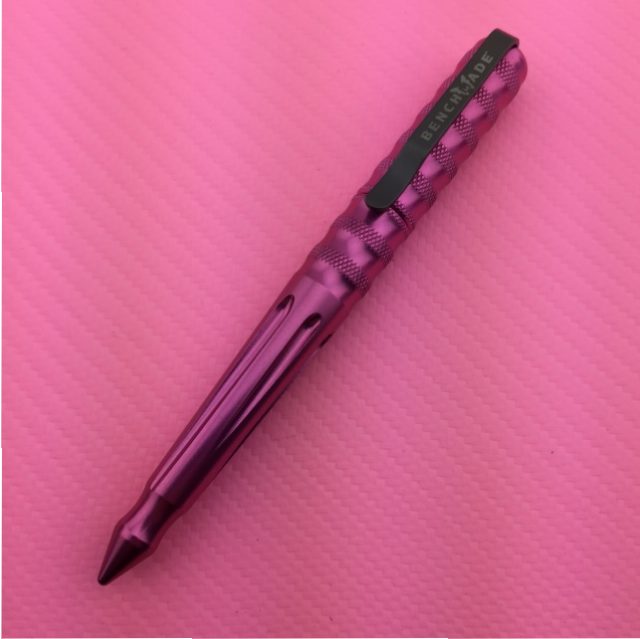 With the Benchmade 1100 Aluminum Pen you are getting a stylish and super tough writing tool that also doubles as a potential self-defense weapon. Aluminum bodies and caps make the pen a solid object that will only break under extreme pressure. With a pointed edge on the rear this allows the pen to double as a stabbing device if need be. The point is not sharp, but will do the job. Inside the pen is a single Fisher Space Pen cartridge, which is the standard for quality pens. The writing portion of the pen is located under the cap which includes a pocket clip for easy carry. The pen’s overall size is 5.33 inches and weighs 1.30 ounces. With its low weight, thin profile and super strong design, the Benchmade 1100 Aluminum is a great tool for writing, and just in case its needed, it can handle a variety of self-defense scenarios and since it is not a knife you can get it into almost everywhere, like school campuses, and according to some forums, depending on how the pen presents itself it should be ok on airplanes. So you can have that piece of mind everywhere including weapon free zones. 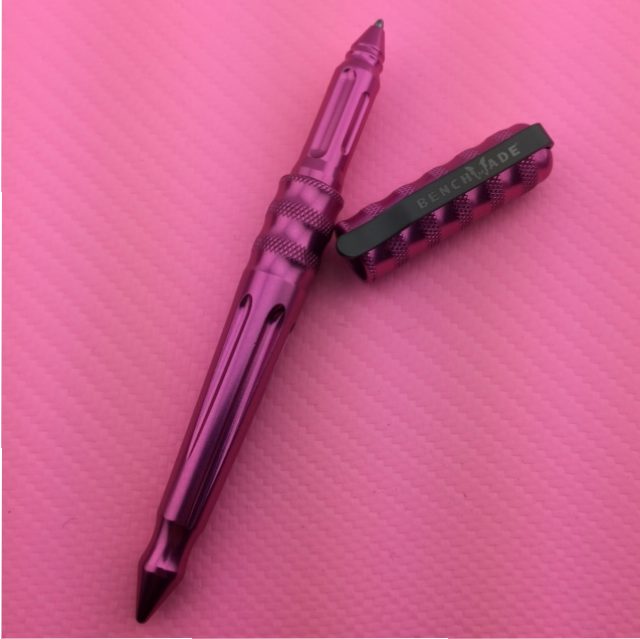 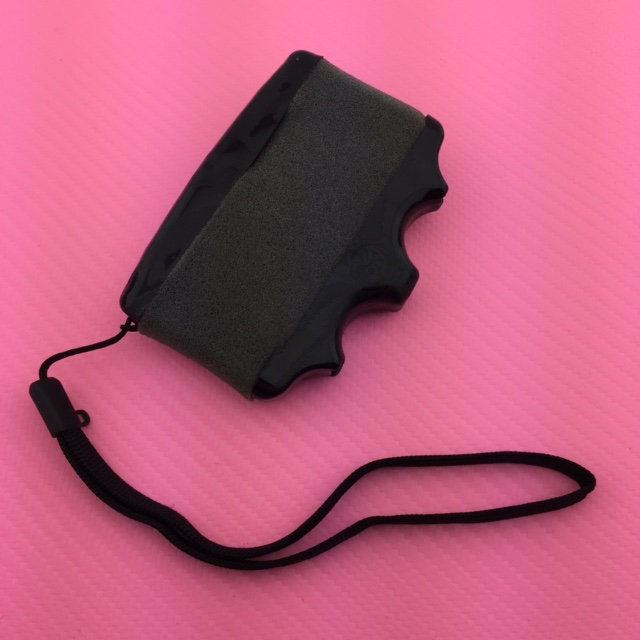 Another potential self-defense tool is the TigerLady. Designed to be carried in hand, this lightweight cell phone sized tool features claws that extend when squeezed within a fist. These three claws are ultra-sharp and would do heavy damage if someone were scratched with enough force. Underneath the claws is also a small channel designed to collect DNA. If you were to use this tool against an attacker you would have a sample of their DNA on hand, making for easy identification if needed. Uses for this device could range from running by yourself or walking to your car, in fact, it is so light that the TigerLady was specifically designed to avoid any discomfort while running with the device in hand. 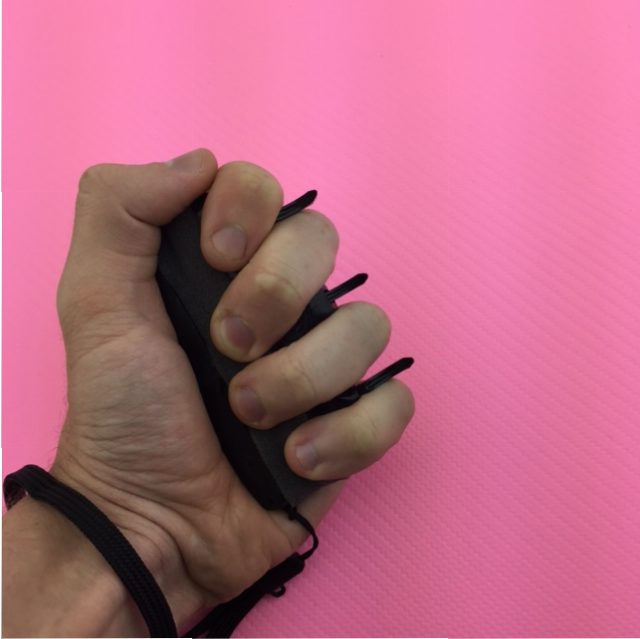 The operation of the TigerLady is quite simple, just grab and squeeze. It is also so light and thin it can easily be place into a pocket or purse. Not special or large space required. With the claws behind your fingers you’ll be comfortable knowing that you are ready for anything. 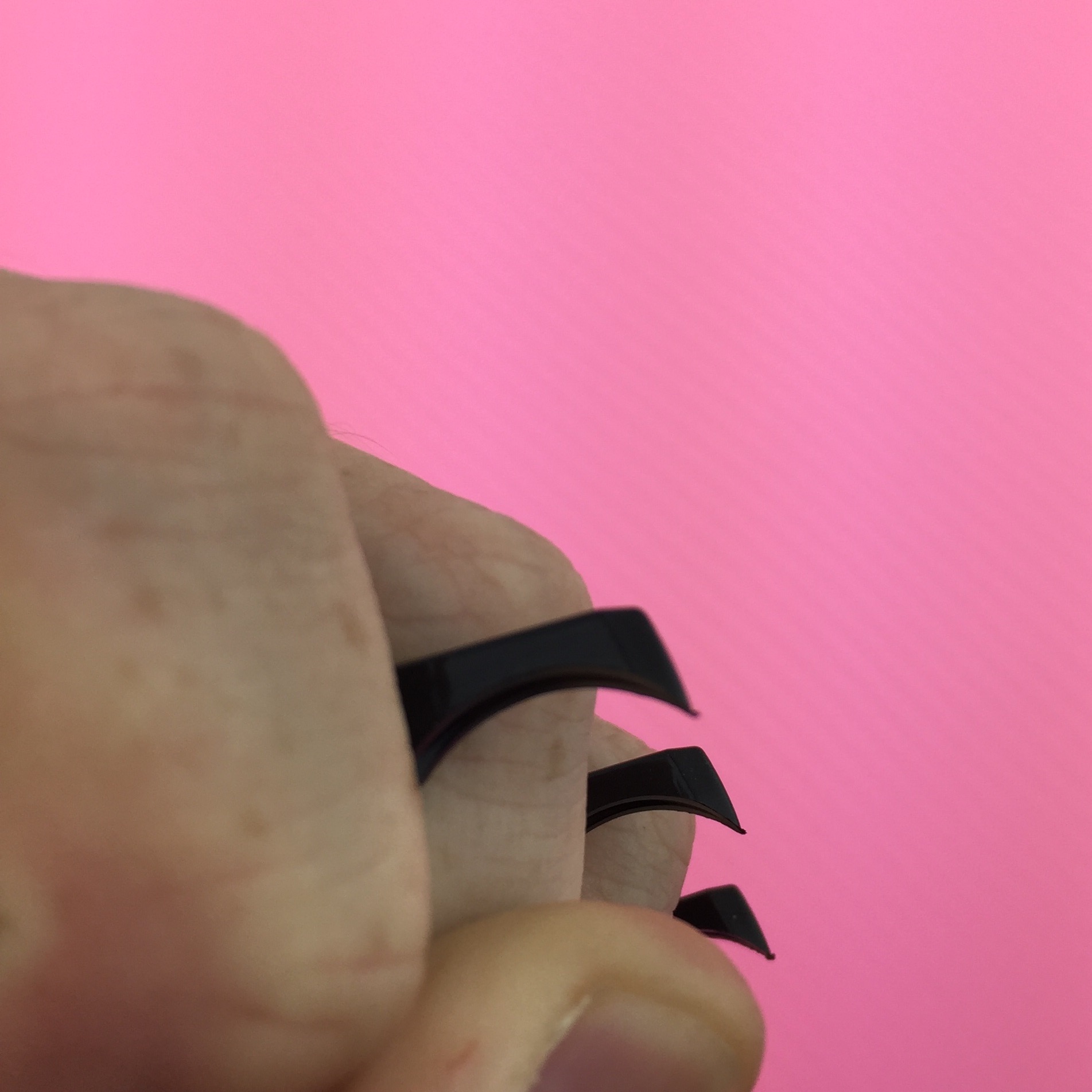 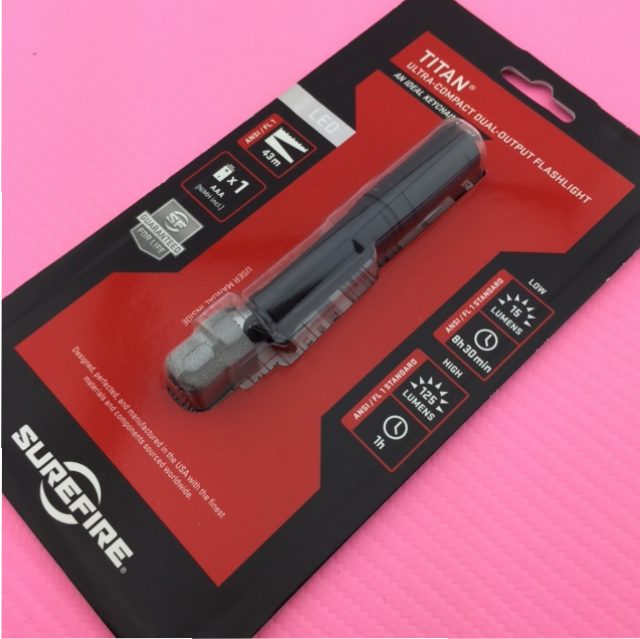 The Surefire Titan is an Ultra Compact LED Keychain Flashlight capable of putting out 125 Lumens. A ridiculous number for its size. With the Titan attached to your keychain you will always have a source of light that drastically out performs your cell phone light. At 3 inches in length and 0.9 ounces this light can easily fit on a keychain with multiple keys. Sometimes just a simple flashlight is one of the best self-defense tools. You can light what’s in front of you and use the light to shine on would be assailants. A light by itself can be extremely effective in deterring an attacker at night. The attacker can’t see what’s behind the light and often light can disorient someone if it is not expected. A flashlight is also has great range, allowing for use for dozens of feet. A flashlight should never be underestimated… And when paired with another defense tool they can make a fantastic duo. 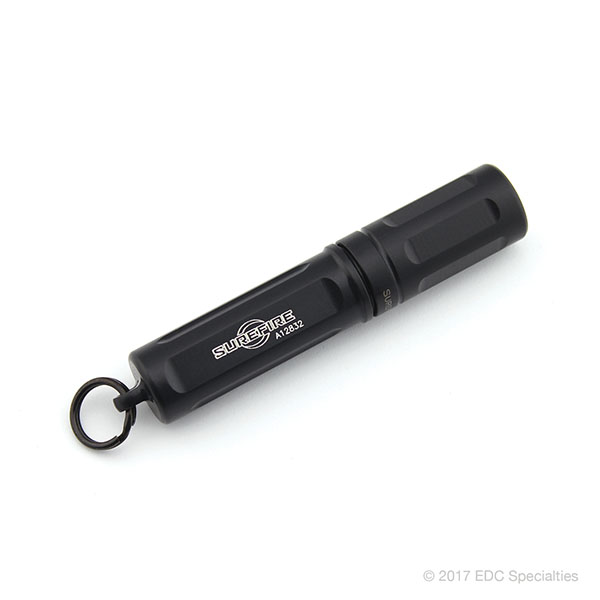 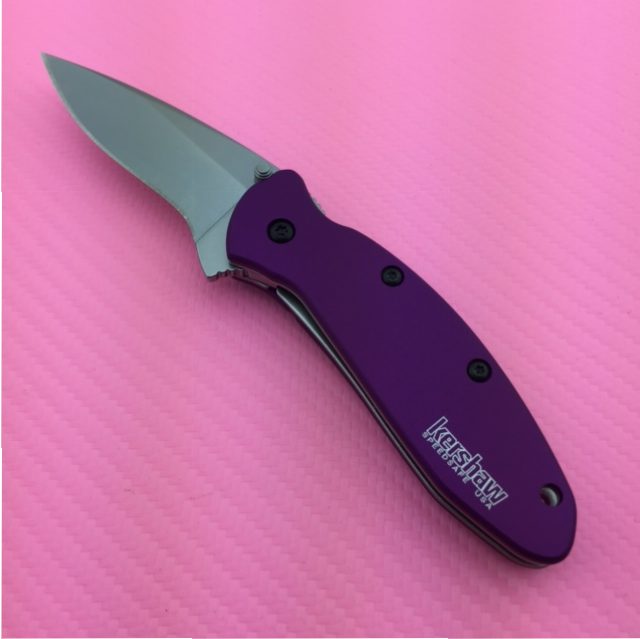 Certainly the most lethal option of this list is the Kershaw Scallion. This knife offers a light weight and comfortable platform for defending yourself while allowing you to tackle various other daily task. There is a reason why most people have an EDC Knife. Yes it is mainly for piece of mind, but most people i talk to who do carry a knife say that they will feel very unprepared if they don’t have it with them. A knife is the oldest form of a self defense tool and is proven to be effective over thousands of years. With the Kershaw Scallion you get a great value, quality steel, aluminum handle, and assisted open in a small package. Knives are a essential category to Everyday Carry and are a great defense tool.

Any of these 5 tools make great tools of self-defense for any women. They are light weight and extremely practical. Which one you prefer simply depends on your preference. Combining any ofthese options would simply make you even more prepared and able to handle a wider variety of situations with more confidence. Invest in yourself and your security. Don’t take a lack of preparedness for granted! Simple tools are the difference between ending a situation or having it go badly.